Adult learning and mental wellbeing: the inspiration of Victor Skipp

Adult learning has significant benefits for wellbeing. Field draws our attention to the ‘remarkably consistent findings from research that suggests an overall positive influence of adult learning on the way people feel about themselves and their lives’ (2009, p183). See also the conclusions of this Mental Health Foundation Report: Learning for Life: adult learning, mental health and wellbeing

The Birmingham University Extramural Department which existed in the 1960s would seem to have been an ideal based on enabling the unqualified public to receive a flavour of what higher education is like, with lectures and seminars from professionals and academics employed by the university. The Extramural Department was in fact disbanded owing to the expense of running courses and Warwick University took over responsibility. This ideal would seem to have been eclipsed in more recent years by such bodies as the Open University and the University of the Third Age.

The most informative book about Birmingham University Extramural Department would seem to be ‘Without Walls: half a century of extramural work’ by John Aitken.  I remember John from when I used to go to the Birmingham and Midland Institute as a student for classes run there by the university.  He was a most efficient gentleman responsible for the smooth running and co-ordination of the classes.

In his Reith Lectures delivered on the BBC, Grayson Perry restated the position that the artist’s primary role is to notice things. By Perry’s definition Skipp might also be understood as an artist, as his capacity for noticing can be seen in the eclectic nature of the art he collected. He appears to have been acutely alert to patterns, geometry and the unifying ideas that he saw everywhere around him.

Educated at Cambridge University, Skipp bequeathed his estate to Kettle’s Yard in Cambridge, consisting largely of art works he and his wife had collected in Suffolk after his career in Birmingham.  See here for the exhibition catalogue.

According to an article published after his death in the ‘Times Higher Education Supplement’ Skipp professed to be a modernist:

‘His appetite for connecting contemporary work with the likes of Benin bronzes and Turkoman rugs was perhaps an expression of this arch-Modernism. It recalled the spirit of exhibitions such as the famous 1948 show at the Institute of Contemporary Arts, 40,000 Years of Modern Art, which drew associations between Modernism and “primitivism”’ (Massouras, 2013).

His tendency to Modernism included African and Islamic art, reinforcing the sense that he ‘was indeed the paradigmatic Modernist he professed to be’ (ibid).

His publications in the field of Midlands local history covered a vast historical range, which included medieval Yardley, the Forest of Arden during the Renaissance, and the Industrial Revolution in Birmingham and books on Bickenhill and Sheldon. A wider collection of writing included a more political or philosophical nature, such as Out of the Ancient World and The Industrial Revolution Then and Now, comparing the landscape of British industry in 1997 with that of 1825.

The work he produced on Yardley, an area that was subsumed into Birmingham in 1911 but once a part of Worcestershire, was produced largely out from the findings of his group of students with the Birmingham Extramural Department in an atmosphere of research and collaboration unique for the time. One of the group, John Morris Jones, went on to become historian of the local area himself in later years.

Skipp’s publications accentuate his domestic atmosphere. This writer’s collection is an opportunity that should not be lost as a reminder both that he was a writer and educator. He had served with the marines during WW2 and after leaving Cambridge in 1950 he taught in secondary schools and was a lecturer at Bordesley College of Education throughout the 1960s and 1970s, at the same time as running his extramural research in local history with the University of Birmingham.

What equivalent study can we find today in the area of adult or higher education – providing opportunities for people to engage in original research, to get in touch with their memories and/or simply develop their capacity for noticing?  And how might initiatives such as this support people’s mental wellbeing, as advocated in the report above?

Aitken, J. (1995) Without Walls: half a century of extramural work, Birmingham: University of Birmingham, School of Continuing Studies

Massouras, A. (2013) A Lasting Legacy: The House and Collection of Victor Skipp, Times Higher Education, 21 November. 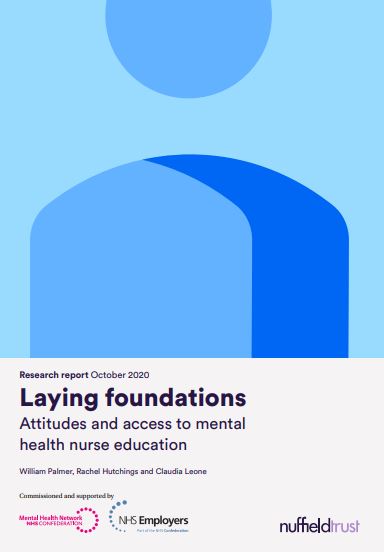 Mental health nursing is a vital and varied profession, accounting for over a third of the mental health workforce in England. Yet the numbers choosing to study to join the profession are…